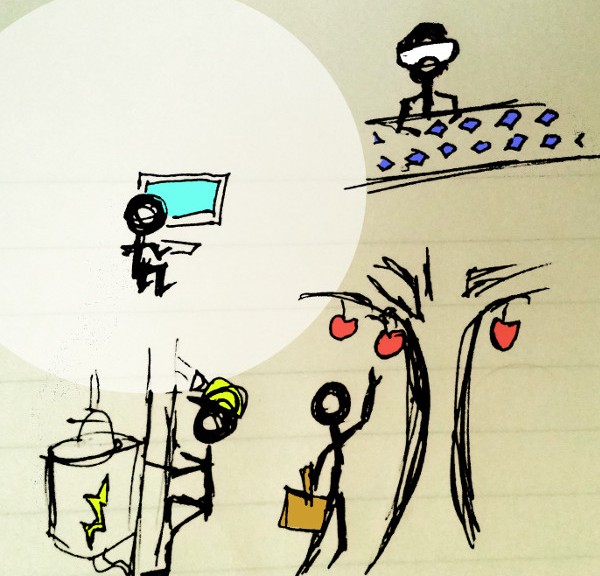 Some friends in more traditional careers like farming and manufacturing have opened my eyes to the privilege it is to have a job in software. Looking at the bigger picture reveals that programming for a living depends upon many other roles to enable such an abstract pursuit. Working from the bottom of Maslow’s hierarchy I can imagine these would at least include: food production, waste management, housing, medical care, police, a justice system, electricity production, hardware manufacturing, and transportation services.

One experience in particular stands out as a moment of awakening. During long drive on vacation conversation turned philosophical as my friend shared his perspective on disappearing skill sets maintaining expensive and old, yet very profitable, manufacturing equipment. Since he was experienced and flexible he was able to keep the machines running, but he encountered few as willing or knowledgeable within mechanics and electronics. While I’d like to be as adept at keeping my existing belongs chugging too, doing so in the face of increasingly –maybe unnecessarily– complex things makes repair and maintenance less practical. And sadly few can afford to be the repair experts when we consumers are so quick to replace them with new and shiny.

Farming in North America was a career for 90% of the population as late as the American Revolution. Now it has dwindled to about 1%. A highly specialized society has certainly broadened the choices for careers in the modern age. It has also increased the need for higher levels of education. And in scarce job markets the competition for work means employers can be selective.

Despite the downsides one sometimes faces as a software or services producer, it is still quite a privileged endeavor compared to many others. Next time I’m waiting in line for service I’ll have to remember all this. I’d rather not go back to the job behind the counter, and I certainly don’t want to make it any worse for those who have no choice.