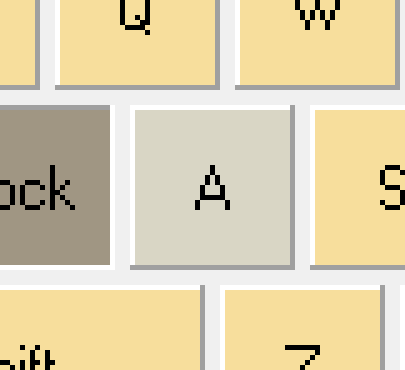 If you’re someone who likes to move the Ctrl key to your home row using Caps Lock, or you like custom Caps+Alt macros, then Acer’s gaming laptops may not for you. Unless of course you don’t need Ctrl+Alt+A or Caps+Alt+A, because that that physical caps-with-alt-a combo is the one and only that won’t work:

Most users may think this is a very niche complaint. But password managers like KeePass default to the Ctrl+Alt+A combo for auto-typing, a feature which may be the only alternative when paste blocking and in-browser add-on’s won’t do. Ctrl+Alt combos are also useful for streaming and power users who want global hotkeys that break out of the scope of programs on Microsoft Windows. Gaming too often requires pressing many keys at once, so much so that the term N-key Rollover was coined. And since the Predator series of laptops targets gaming, it is strange to see such a oddly narrow gap in models that cost $2,000+ USD.

Caps-as-ctrl is also a fairly well known arrangement, so much so there is even a highly ranked article disputing its benefits. It’s an arrangement I’ve enjoyed on-and-off for years, and until now had never seen a keyboard which did not allow the physical caps-alt-a combo.

If you’re a consumer consider yourself warned. If you’re a manufacturer then please better educate your level-1 support, and thoroughly test features important to your target demographic. Because top-shelf consumers may go elsewhere when faced with beta testing your hardware.