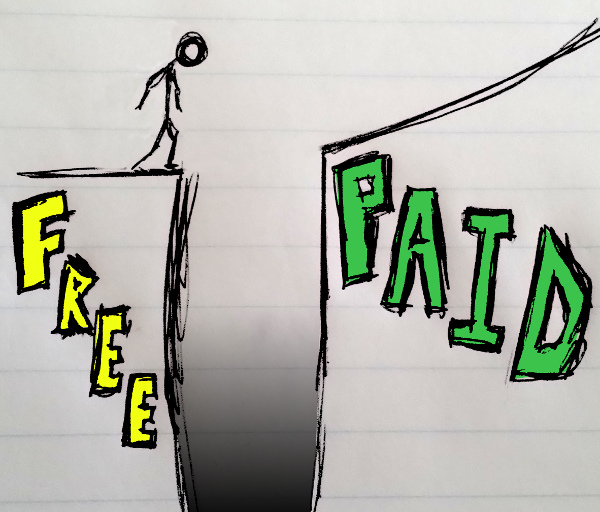 When prices go up existing customers feel like they got in at the right time. Prospective customers who missed the sale may feel left out, unless there is a hope for sale in the future or price increases are consistent. But there is one price that seems to have more inertia than any other: free.

A while back on This Week In Enterprise Tech one of the hosts made the point that permanently lowering a price is challenging because of the potential for resentment. After all, no customer wants to find out what they just paid good money which they could have saved. Yet they also mentioned that raising the price is typically not a problem. As a consumer I’d say this is true.

Products improvements and inflation have conditioned me to expect most of the products or services I enjoy to increase in price: appliances, movie tickets, food, and so on. (Preferably this is gradual or otherwise feels justified.) So why is it that seeing a product go from free to paid often involves a backlash? Examples include LogMeIn, ZenDesk, and more recently Steam mods. My guess is the mental gap between free and even one dollar is larger than from one dollar to five.

Initially my preference for free products was driven by the desire to save money. Though over time I became fixated on the other benefits as well:

Of course nothing is truly free of cost. This was often clear in the quality of free offerings compared to paid ones. Microsoft Paint was included with Windows for free while PaintShop Pro was a paid product. Ultimately I got more use out of PSP. Doom modding tools were free, still I found myself far more productive with the non-free Klik & Play; albeit making simpler projects.

Even in mobile gaming where ‘free’ now dominates, typically with quality included, the shifting and hiding of costs is increasingly distasteful to me. Producers are tempted to not only make things enjoyable but rather tease players into paying ever more. Sometimes it manifests as pay-to-progress or pay-to-win. And while ‘shareware’ and trial editions have a similar model they are often explicit, one-time payments. Producers are less likely to string players along.

Now that I’m older and more patient paying for quality products and waiting for sales appeals a lot more to me than in past. Being a producer has also changed my perspective on what ‘free’ really means. Yet there’s still that twinge of discomfort when the ‘buy’ button is in the way. Perhaps it’s the feeling of lost opportunity since I could spend the money on something else. But once I’ve paid the bills and saved enough for long-term goals there’s very little reason to hold back. After all, I can’t take it with me.