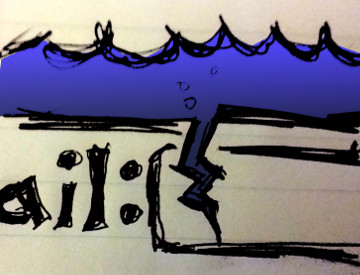 Makers of software and technology services must walk a delicate balance between allowing users the freedom to enter their choice of input without allowing compromise of the system. Traditionally systems have assumed users have the best of intentions; this can lead to positive emergent behavior and growth. But as more business has moved on-line so have thieves and other malicious users. It’s no wonder that malicious input is now the number one threat on OWASP’s top 10 list.

Water seeks the path of least resistance as it flows, making rivers crooked. Likewise as the volume of user input increases it also seeps into more and more areas of weakness. And as the developers of services address these weaknesses it often adds complexity that bends and contorts their systems. E-mail software has become increasingly complicated because of it how it is used, misused, and creatively adapted.

At times the data itself becomes deformed to fit within whatever bounds cannot be broken, similar to water filling a form. Twitter‘s 140 character limit has led to or expanded creative use of text including: hash-tagging (‘#’), at symbol (‘@’) nicknames, URI shortening services, etc.

Despite the advantages of allowing liberal input my experience has been that it’s usually best to start strict and loosen up later. Trying to deny values or data that people have become accustomed to is a challenge. The push back may be too much to overcome, meaning the producers must live with that data forever or try to slowly deprecate it.

In extreme cases systems are like submarines in the deep sea which must withstand constant, destructive pressures. Without careful management and design user behavior and contributions can become the tail wagging the dog. This can be beneficial in some cases; though, it can also lead to unmaintainable expectations. An example in the larger software ecosystem is seen as the free software movement advances and some users (at times myself included) come to expect software at very low or zero cost despite the costs involved in their production.

What do you think?